Our Kathmandu Pokhara Chitwan Lumbini Tour explores some of the natural, cultural, historical and religious highlights of Nepal. Kathmandu is not only the capital and economic hub of Nepal; it is a city with a rich history that goes back around 2000 years and is well interwoven and inseperable from mythology and legend.

The well preserved ancient royal palaces in Kathmandu, Patan and Bhaktapur date back to the 12th century. These are remnants of the three distinct kingdoms which once ruled the valley. Until now, these ‘darbars’ function as temples; and each one is home to a Living Goddess, or Kumari. Religion is an important part of the culture and lifestyle of the Nepalese.

Pashupatinath is the most sacred Hindu shrine in Nepal and one of the 275 Holy Abodes of Shiva on the continent. It is believed to date back to 400 A.D. It is the preferred site of cremation for Hindus, as it is situated along the banks of the Bagmati River; ashes swept into this river eventually reach the Holy Ganges. A yearly festival called Maha Shivaratri brings over 700,000 devotees to Pashupati.

Boudhanath is one of the largest Buddhist stupas in the world as well as one of the holiest centers of Tibetan Buddhism outside of Tibet. Thousands of Tibetan refugees have found refuge around this stupa since the Chinese invasion. Shops and gullies around the stupa have a distinctly Tibetan style. The stupa is rich with Buddhist symbolism.

Swayambhunath is a prime example of the beauty of coexistence and fusion of relition. Both Buddhists and Hindus pay homage there. Climb 365 steps to reach the 5th century Swayambhunath for a birds-eye view of the city. It is also called the Monkey Temple and you will understand why when you pay your visit

Pokhara is a tranquil city of incredible natural beauty. Pokhara is the starting and ending point for most treks in the Annapurna Region. Tourist hotels and shops are clustered near the peaceful Fewa Lake, which has a small island in the middle, just big enough for the Barahi Temple.The island is reached by row-boat, as is the World Peace Pagoda which is perched on a hill on the south shore of the lake.

It is possible to get some wonderful views of the Annapurna range right from Pokhara. Directly north, towering over Pokhara is the Machhapuchhre, 6993m, or Fishtail flanked by three eight-thousand mountains Dhaulagiri 8167m, Manaslu 8163m and Annapurna 8091m. For an even better view, we will drive to Sarangkot on a nearby hilltop to watch the sun rise on the mountains.

A tributary of the Seti River narrows into a deep canyon and even goes underground as it passes through Pokhara. At one point called Davis Falls the water gushes down, and then disappears underground. Nearby Gupteswor Cave is a dedicated as a Hindu temple on the first level, and the second, lower level goes down to where the river runs. When the river level is high during the monsoon, the cave is closed.

Chitwan National Park is a wildlife conservatory and one of the world heritage sites of Nepal. The sub-tropical jungles of southern central Nepal are a sanctuary for the one horn rhinoceros, tigers and wild elephants as well as many other wild animals and birds. Some of the delightful ways of enjoying the wildlife are canoe rides down the river and elephant or jeep safari into the jungle.

Chitwan is also home to the Tharu ethnic group who were likely the earliest inhabitants of the area. Tharu culture is unique and fascinating. Their spiritual beliefs are strongly linked with nature, not surprising as they have lived harmoniously with nature for centuries. A cultural program is likely to include Tharu stick-dancing and the peacock dance.

Lumbini is the birthplace of Lord Buddha and the most sacred pilgrim site for Buddhists all over the world. The Mayadevi temple houses the ruins of the home where Siddhartha Gautam was born in 623 BC. Numerous stupas have been built by Buddhist worshippers from many countries. Lumbini is a beautiful and peaceful place where pilgrims from all over the world come to chant and meditate. Other attractions are the sacred Bodhi tree and the Puskarini or Holy Pond where the Buddhas mother took the ritual dip prior to his birth and where he, too, had his first bath.

Private Tours are avialble to start instantly. Group departs when we have minimum 1 participant for any Tour

Day 4: Sunrise view from Sarangkot and Day Tour of Pokhara

This amazing tour is available and can be done throughout the year. So, pick your preferable date and let the adventure begin.

We have listed the price up to 12 participants at maximum. If you are more than 12 members, then please feel free to contact us for amazing discounted group price and further booking process.

Private Tours is possible on any date of the year. Contact us to design your own private trips with you loved ones.

Best Season for the Kathmandu Pokhara Chitwan Lumbini Tour
This tour is possible throughout the year however, the monsoon during June- mid September may not be the best time for good views, though everything is lush and green then. From mid-September through until May is the best time of year.

Temperatures on the Kathmandu Pokhara Chitwan Lumbini Tour
The temperatures from November to February are cold at night 10C and usually fairly warm during the day 20 C. We recommend bringing a warm woolen sweater or a jacket. For the rest of the year, it gets quite warm during the day, even as high as 40C in Chitwan and Lumbini. We recommend bringing layers for the fluctuating temperature. Sunscreen and sunglasses are needful.

NEPAL: BEYOND THE HIMALAYAS 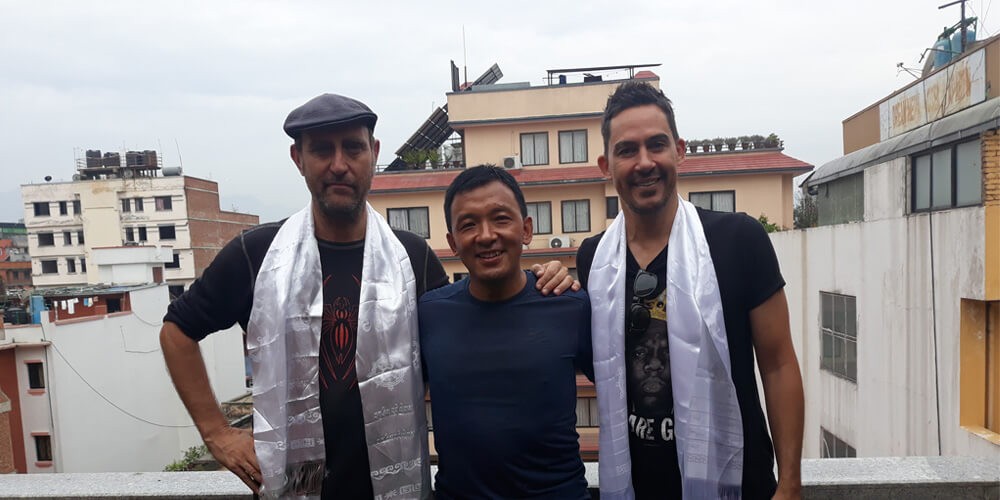 Everybody thinks of Nepal as a country full of big mountains and a place to trek and climb, but Ngima showed us that it´s much more than that.

Thanks to him we discovered the Chitwan jungle, where we could see elephants, rhinos, crocodiles, buffalos and lots of birds.

Also the beautiful lake of Pokhara, surrounded by the Annapurnas, and one of the best places to meditate and relax.

Ancestral cities like Bhaktapur, Patan or Gorkha, full of temples and history, where you can breath "the real Nepal".

And one of the most unique trails in the world, the Siddharta Road, going through mountains, gorges, villages and the most astounding views ever.

Ngima and his crew are definitely the BEST guides we´ve ever met in any country, so we highly recommend to organise your trip to Nepal with them.

All the best and Namasté !