Lo Manthang, Upper Mustang (formerly, Kingdom of Lo) is an ancient forbidden kingdom bordered by the Tibetan Plateau and sheltered by some of the world's highest peaks including Annapurna (8091m) and Dhaulagiri (8167m). Being restricted and untouched to the outer world, it would be fair enough to state that Upper Mustang is the living museum of ancient Tibetan Buddhism, tradition, culture, lifestyle and mosaic history. Upper Mustang cannot get more remote as it is one of the most preserved regions in the world due to its relative isolation from the outside world with a majority of the population still speaking traditional Tibetan languages.

Trek to the pristine Upper Mustang leads you into a region that used to be part of the Tibetan empire and bears close resemblance to landscapes of Tibet. Pure Tibetan Buddhism is followed. Upper Mustang is widely known for the exploration of the centuries-old caves, culture and ancient old monasteries of the region. Villages are built in Tibetan style and houses are white washed with firewood stacked on the roofs. Tiji Festivalcelebrated in Lo Manthang for Three days is one of the major attractions for the visitors who look for experiencing the innate civilization of Upper Mustang. Here are some great reasons that you should trek to the mystic land of Lo Manthang, Upper Mustang in Nepal.

1. Classic and Restricted Trekking in the Himalaya of Nepal 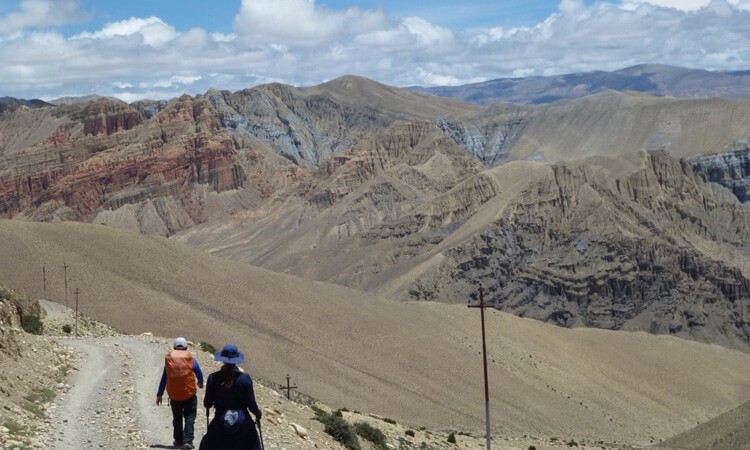 Upper Mustang Trekking is an instant Himalayan Classic. The trek is remote and restricted where the adventure seekers can explore the centuries-old caves, unspoiled civilization and sacred monasteries of Tibetan Buddhism. Local people of this region have minimal contact with the rest outer world even Nepalese living in cities, so they’ve successfully managed to contain their rich and wealthy cultural monuments and traditions. Trekking to Upper Mustang was allowed only two decades ago and even today, the area remains restricted trekking region and requires special permit for trekking. Upper Mustang Trekking is not like trekking in Everest, Annapurna, or Langtang, the landscapes, trail, culture, people, thier culture, traditions etc. makes this trip a unique and immersive experience in the Himalaya of Nepal. 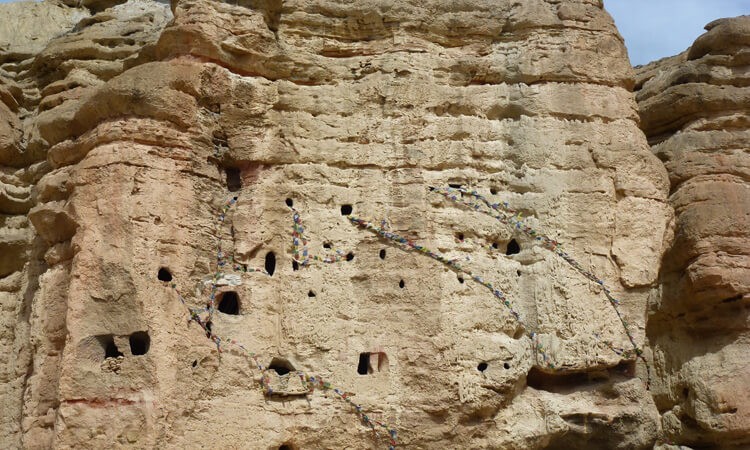 Caves around Lo Manthang, Upper Mustang have a complete tribal history intertwined with the local people in general. Apart from the glistening landscapes, captivating mountains and divine remoteness, the existence of more than ten thousand plus caves contemplates a magical charisma to Mustang region. We can eye witness the multi-storied heavenly caves in the cliffs which are approx. 30 meters above demonstrating an archaic generation of the human race. In the past, different caves had different purposes; People used to take the refugees in the caves, some caves were used as a vault for valuables, etc. Some of the caves have stupas built inside it (like in Luri and Tashi Kabum). There are several funeral caves in different parts of Upper Mustang too. The Chokhopani funeral caves nestled on the northern edges of Chokhopani Khola contained pottery, bones, beads, copper jewelry, etc. Besides, the conduct of Bon practices also can be observed in the mysterious caves around Upper Mustang. 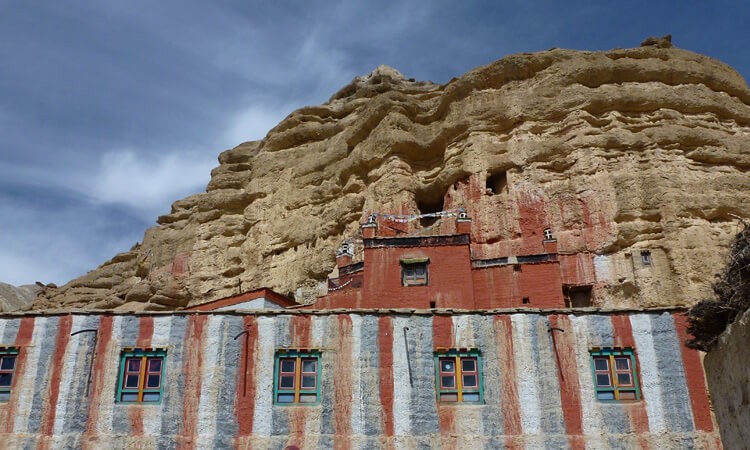 Monasteries of Mustang region are the real highlight of the region. Most of these monasteries have not been affected by today’s’ life and modernization. Some of the notable monasteries around Upper Mustang are Chungsi cave monastery, Tashi Chyoling Gompa, Lo Geme Shad Drup Darkeling Gompa, Jhampa Gompa, Thupchen Gompa, Chhyode Gompa, Luri Ghang Gompa, Chhujung Gompa and many more. These locations are amid the finest remaining models of classical Tibetan monastic architecture. Several monuments, such as Ghami’s Mani wall (305m long), Khorok Chorten, Dakmar and Ghar Gompa of Lo Gekar in Upper Mustang have kept the legendary history of Padmasambhav alive. 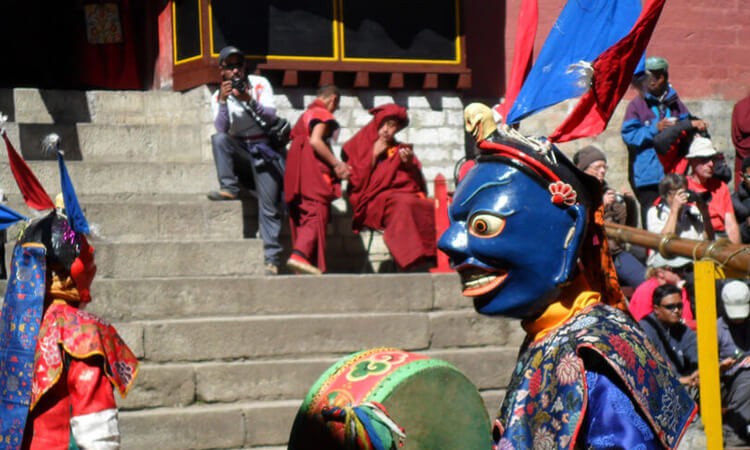 Tiji Festival is a captivating 3 Days Festival which occurs once a year where the Tibetan honors the myth of a son who had to save the Mustang Kingdom from destruction (according to Tibetan rituals). The Tiji Festival is probably the most auspicious festival in the Upper Mustang region of Nepal which to be specific, is indigenous to Lo-Manthang. Originally, the Tiji festival was performed at the end of the twelfth month of the Tibetan calendar but at present, it is performed during third Tibetan month (May). The Tiji festival dances are all organized by the Choedhe Monastery, which belongs to the Shakya sect of Buddhism.

Royal family members of Mustang and all the villagers of Mustang take part in this divine dance accompanied by many ceremonies. It is believed that Tiji festival is a part of the meditation practice based on the Tantra text related to Vajra Kumar. There are three major stages of the dance ritual. In the opening part, there are 15 steps. In the second part, the ‘formation of heavenly palace’ and ‘era of Gods’ are illustrated in two steps. And finally in the conclusion, there are steps to clear away boundless outlooks to serve felicitousness. The people in general have belief that the obstacles in life will be cleared away by observing these steps with faith, respect and appreciation. 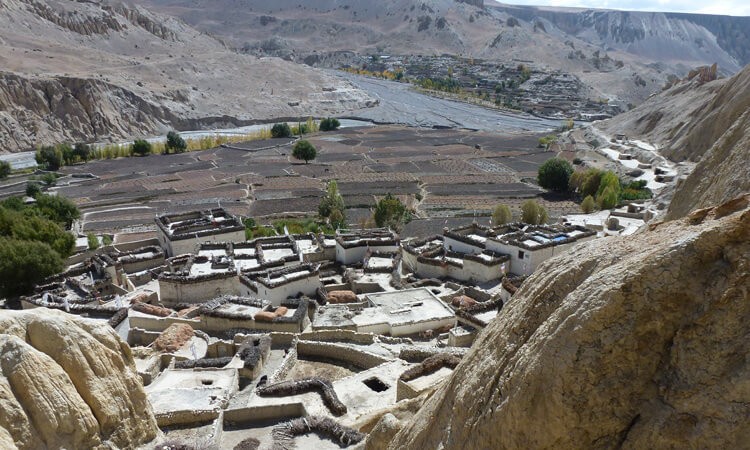 Believed to be found in 1380 AD, Lo Manthang is a deserted Tibetan settlement which was one of the Kingdoms once when Nepal was in monarchy structure. Lo Manthang, capital of the former Kingdom of Lo is surrounded by a 6-meter high clayed wall with square forts on the rims and a tight establishment of earthen architectures endures inside these walls. The main monuments found within the walls are the palace and monasteries of Jhampa Lakhang and Thupchen Lakhang from the 15th Century and the monastery of Choedhe Lakhang from the 18th Century. There are several rows of chortens and mani walls within the settlement and along the circumambulatory path directly outside the wall. There’s also a local library. There is no comparison to this unique settlement as the culture is to a large degree defined by the Sakyapa traditions of Tibetan Buddhism and even today many of the ancient festival, rituals and ceremonies are being performed accordingly which can be witnessed only in the walled city. Exploration around Lo Manthang is one of the major highlights of your Upper Mustang Trekking in the Himalaya of Nepal. 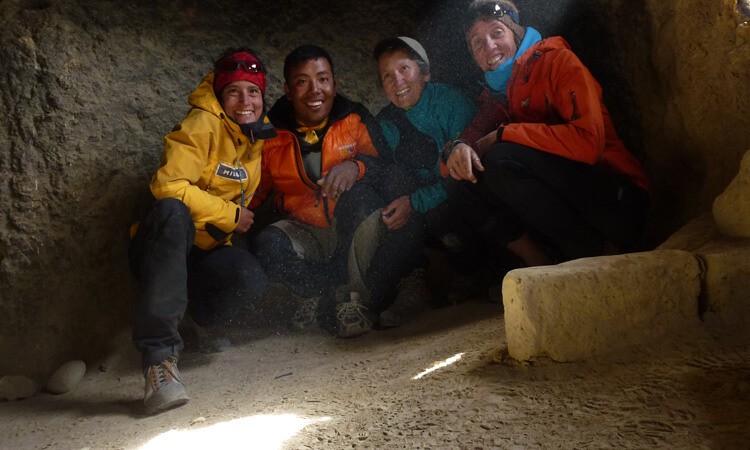 The culture of Upper Mustang (former kingdom Lo) is deep - seated in the religious sentiments of local as the region flourishes with several Chortens, Mani walls and Monasteries. Bon prevailed before Buddhism, which was later replaced by Ningmapa Sect (Dhakar-Kayu sub sect) and subsequently by Sakyapa Sect (Sakyapa, Ngorpa sub sects) of Buddhism. The three storied Jhampa Gompa is an excellent piece of craft as it fully presents Lo-Manthang’ great architectural depth of history. At present, Choedhe Gompa is the main Gompa of Lo. Inhabited by the Khempo, Choedhe Gompa is also the center of holy activities. Next to Choedhe Gompa, a monastic school is attached which is the only Sakyapa monastic school of Upper Mustang where young monks are taught on the teachings of Buddha. At present, there are approx 90 monks studying in this school. With some angel support, an Amchi school runs in Lo under the Management of the Amchi family (Tibetan Herbal Doctor). Since the people of Lo have faith on traditional herbal medicines to cure diseases and the faith holds accurate even today.

7. People and their Lifestyles 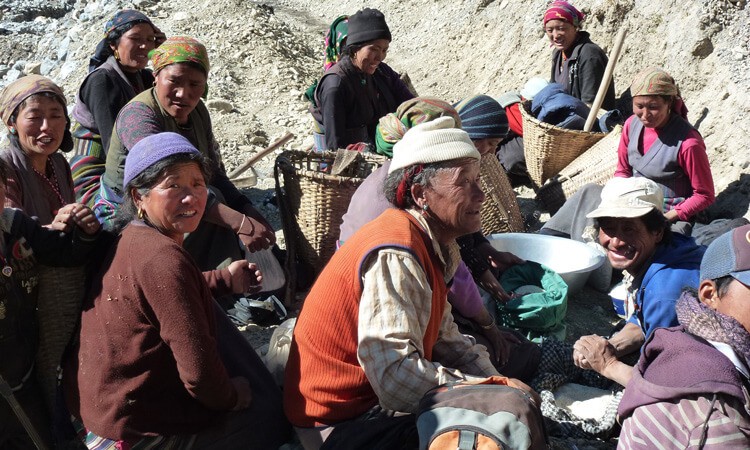 In Lo Manthang, around 1200 Lobas (people of Lo) exists in 200 mud houses approximately. Still to a great surprise, they witnessed an order of social class. Accordingly, the main are the Kudak (Bista- the nobility and royalty of Lo) and the Phalwa (Gurung) who live within the walled city. Ghara (black smith), Shemba (butcher) and Emeta (musician) mostly live in the settlement beside the Lo Manthang River that flows to the east of the city. The Raja (King) and Rani (Queen) lives in ‘Monkhar’ - the four storied white-washed palace located in the middle of the city. The palace was believed to be built by the first King of Mustang, Ame Pal, in the early 14th century. Domestic farming with agriculture is still the backbone of the economy. With the arrival of tourism in Lo in 1992, local people have also started taking up tourism as a new economic profession. 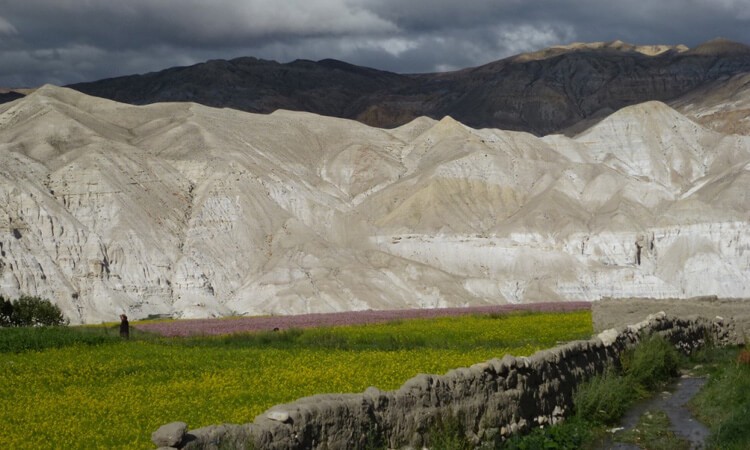 Upper Mustang Trekking is doable in summer season too. The spring (April-May) and autumn (September-November) are the most ideal season to visit Upper Mustang. During the spring many foreign visitors like to go and experience springtime festivals in the region, while the autumn is the most popular trekking season. The summer is a less-known but ideal time to visit Upper Mustang because the region is surrounded by mountains to the south that block many storms. Also, Upper Mustang lies in a “rain shadow” region and is therefore dry for most of the year. Although it does see the occasional rains and storms, these are by no means as frequent or long-lasting as in the rest of Nepal and actually make for a special visit to the region by turning a few normally dry and brown areas bright green. Upper Mustang is the perfect summer trekking destination in Nepal. 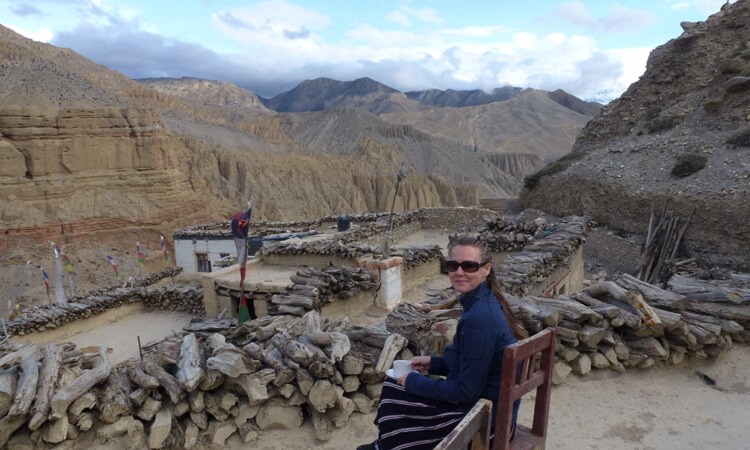