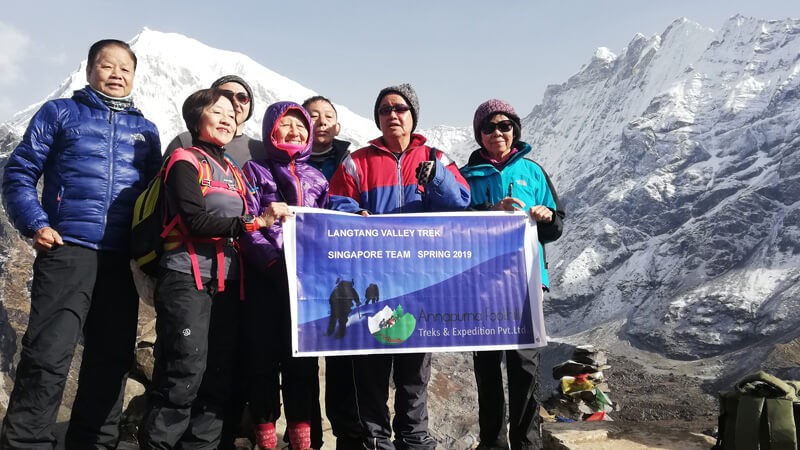 This fantastic trek into the Langtang Region is overlooked by the majority of trekkers, perhaps because of its proximity to Kathmandu. However, due to its accessibility, this trek is perfect for shorter itineraries.Tourists with a one or two week time frame can get the complete experience of Nepal’s mountain’s and the culture.  Furthermore, one advantage to the Langtang is, since relatively few trekkers visit this area, it is less commercialized than the popular treks in the Annapurna and Everest regions.The food and lodging on this trek will give you a much better idea of the typical mountain people, while still being hygienic, clean and perfectly comfortable.

In the Langtang region, there are three different treks which can be done separately, or combined as a longer trek.The Helambu Region refers to the rugged north-south valleys and ridges that start from the northeast perimeter of Kathmandu. North of the Helambu, is an alpine region called the Langtang Valley, which tunnels its way running east and west between the Langtang and Jugal mountains, stretching almost all the way to the border of Tibet.To the northwest of Helambu, is the Gosainkund region, a rugged range of hills harbouring a string of clear blue sacred lakes.

A combined trek of all three areas takes sixteen or more days. It may not be possible however, to do a combined trek in winter as the Suryavikayak Pass between Langtang and Gosainkund may not be traversable after the snow falls.If any of these treks are done separately, the return journey retraces the same trail. However, most people find that even returning on the same trail, there is more than the eyes can absorb or camera can capture.

The Langtang Valley Trekking can be done in just one week, or it can be lengthened by adding delightful day hikes into the upper valley. It can also be combined with Gosainkund to make a 10 day trek.

The trek starts from Syaphru Besi, 1400m. The trailhead is only 123 km from Kathmandu, but it takes 8-9 hours on a very bumpy, narrow and winding road to reach there. The trail meanders up the gorge of the Langtang Valley. The tall forests of oak and rhododendron trees in the lower valley change to small hemlock and larch, and finally a barren moraine of the glacial valley surrounded by an amphitheater of snowy peaks. The springtime flowers on this trail are spectacular, and in autumn the beriberi bushes turn flaming red. 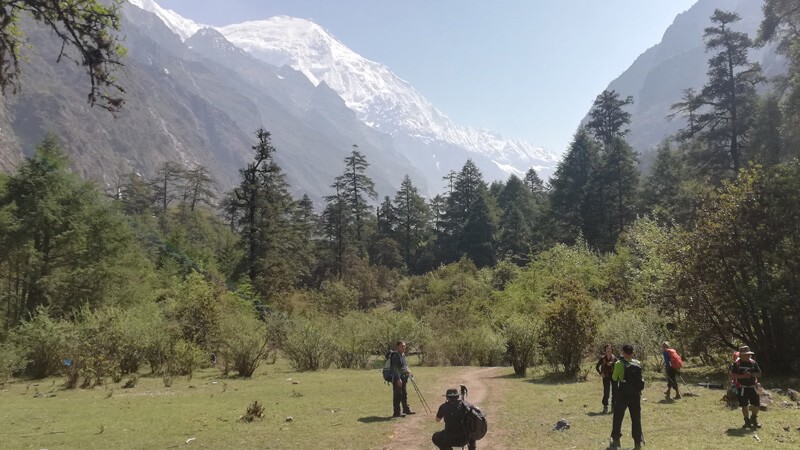 In the upper valley there are two Tamang villages. Langtang, 3300m, ancient settlement surrounded by fertile fields of potatoes and buckwheat. It is a good place to spend an extra night to acclimatize as there is so much to explore.    Kyanjin Gompa ,3750m, a village for seasonal yak herders and tourists has a cluster of chalet-lodges. As well as a small monastery, there is a cheese factory.  You will want to taste the yak cheese and yoghurt from this village.

Tsergo Ri ,4984m, is a 6-7 hour day trek that is well worthwhile for the spectacular white wilderness views of Dorje Lakpa, Yala Peak and Naya Kang.

Kyanjin Ri, 4773m, is a two hour trek above Kyanjin Gompa, from where we get a spectacular view of the west face of the Langtan Lirung mountain towering over the Kyanjin village below us.

The return from Kyanjin Gompa follows the same trail down the valley branching off at Thulo Syaphru, the trailhead to Gosainkund, and descending to Dhunche for our return by bus to Kathmandu. 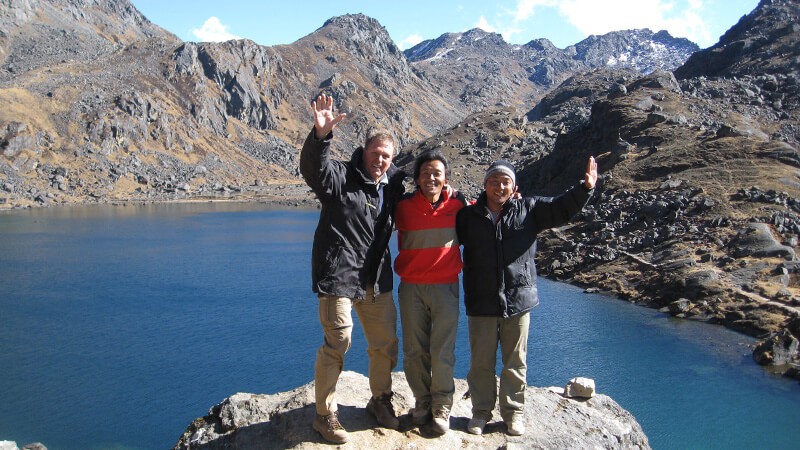 A bus from Kathmandu takes us to Syaphru Besi, the Langtang Trek trailhead.The trail ascends sharply through mossy rhododendron forest to Sing Gompa, 3250m, where there is a monastery and cheese factory. Above Sing Gompa, the trail climbs through tall forests of fir trees. Vegetation grows increasingly sparse. Finally, beyond the tree line the barren hills offer unobstructed views of the snow-capped mountains. Laurebinayak is a beautiful place to stop. From here we look down on some half-dozen small lakes including Gosaikund; kund means pond.Glacial moraines and rockslides have left a string of ponds, just above the headwaters of the Trisuli River. According to legend, Lord Shiva saved the world by drinking a deadly poison, and then struck this mountainside with his trisul (three-point fork) to create this lake and drink the cool water to soothe his burning throat.The Gosaikund is considered the most sacred, and once a year, during the full moon of July–August, Janai Purnima, Hindu worshippers make a pilgrimage here. We stay in one of the several lodges on the shore of clear blue waters of Gosainkund.

From Gosainkund the trail climbs two hours southeast up to the Laurebinayak La, 4610m, a pass with exceptional views.  In winter, ice and snow can make it difficult or impassable. From the pass descend three hours towards a lodge at Phedi, 3630m. (If we do the Helumbu trek first, we would start from here, then climb to Laurebinayak Pass to reach Gosaidkund.)  The three hour trek to the small hamlet of Gopte, 3530m. A gentle descent and ascent brings us to Tharepati, 3510m, perched on a windy and sometimes snowy ridge from where we get excellent views of Dorje Lakpa and Sishapangma mountains. Most of the lodges we stay in on the Gosaikund Trek are seasonal lodges to accommodate trekkers rather than permanent villages. From Tharepati the trail descends quite rapidly to the east through Melamchigaon and Tarkeghyang, reaching the roadhead at Thimbu where we catch a bus back to Kathmandu.

Helumbu Trekking is the most accessible of the three regions and its vast network of trails allows trekkers a flexible schedule. It is even feasible during winter. Acclimatization isn’t a problem because, although the Helumbu Trekking trail has a lot of ups and downs and covers a wide elevation range, its highest point is only 2700–3200m, the least elevation of the three.The Helumbu Trek offers amazing views of the Langtang Himal, though not as close up as from other trails.

Helambu’s fertile valleys and misty ridges are still more isolated than other areas since few people trek here. The people of the upper Helambu region are primarily Sherpa and Tamang, whereas high caste Brahmin, Chettri and Newar people farm the land in the lower valleys. It is easy to observe the distinct cultures while trekking through the predominantly Hindu villages of the valleys and the Buddhist villages of the hills.

The Helumbu Trek starts from Sundarijal, a taxi or local bus ride from Kathmandu. The most popular route is a five to seven day clockwise loop around two main ridges on either side of the Melamchi Khola, which avoids the Melamchi Hydro Power Project under construction in the valley. There are however, many less travelled options that can be explored.

The rising and falling trail from Sundarijal passes through the Shivapuri National Park to Chisapani and then climbs to Khutumsang and Threpati. (From Helambu you can reach Gosainkund by taking a long, high, rugged route from Tharepati, over the Laurebinayak La pass.) From Tharepati the trail winds east, to the charming Buddhist villages of Melamchigaon, Tarkeghyang and Sermathang with their ancient monasteries, chortens and stupas.The trail meanders through dense oak and rhododendron forests. The lokta tree is also found here; its bark, which regenerates itself, is harvested to make traditional Nepali paper. From Sermathang we walk down the ridge towards Melamchi Bazaar and get a vehicle for the return journey to Kathmandu.